To architecture, structure provides the organisational model that supports the building, and elements - the muscles - that distribute or shake off the impacts incurred during an earthquake. The purpose of traditional structural design is to strengthen a building by a skeleton. But, Balmond's designs impart fluidity and flexibility. Instead of being unmoving, provide the entire structure with an overflowing kinetic energy. But how does he do this?

While being influenced by external factors such as the surrounding environment, of nature grows into unique organisms in accordance with the rhythms embedded in their genetic code. Balmond believes the same thing can be applied to architecture. He poses the question of whether it is possible to create rich architecture that grows naturally out of his own codes, responding flexibly to complex factors and conditions. Balmond's job is not to design details, but rather to design the very structure that brings a building to life. Gallery 2 showcases Balmond's installations of new space on an architectural scale with large works like H_edge and Danzer, allowing visitors to experience his method of breathing life into constructs through the entire gallery space. 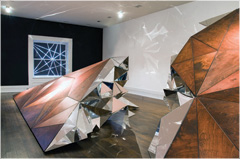 Danzer
2009
Photo: Alex Fradkin
Danzer is a giant, three-dimensional puzzle. Close examination reveals that it is made up of only four kinds of tetrahedrons, each of which in turn is embedded with miniature versions of these four tetrahedrons. Nature abounds with these kinds of fractal forms, from the shape of coastlines to the branching of trees. 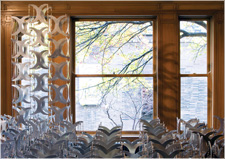 H_edge
2009
Photo: Alex Fradkin
This three-dimensional work consists solely of H-shaped aluminum plates and chains. Unable to stand on their own, the plates and chains combine together in a regular way to support each other, creating a labyrinth space of seemingly infinite scale, extending both within and without. 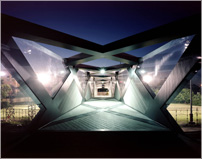